1.    Is it necessary to be on a full elemental diet, or is a part-time diet an option?

What do you need the Elemental Diet for? Can you perhaps find a middle ground by repla­cing only one or two meals? Your medical provi­ders will inform you what they think is best in your case: If one were to use the elemental diet for active Crohn’s disease, it certainly would not be a good idea in the early stages, but later, a part-time elemental diet may be a tool to keep you in remission.

For example, one study showed that the longer-term remis­sion rate in Crohn’s disease, when the disease has become quie­scent, was signi­fi­cantly higher on a partial elemental diet than a normal diet.

In this partial elemental diet study, half of the required calo­ries were consumed daily through an elemental diet, and the rest of the energy requi­re­ment could be met from preferred foods.[1]

For pati­ents with allergic, eosi­no­philic, or mast cell-related dise­ases, it is in most cases suffi­cient after the initial calming phase to replace only one or two meals. The avoid­ance of indi­vi­dual aller­gens and trig­gers allows the intes­tine or the intes­tinal mucosa to rest from time to time.[2] Your medical staff in charge can guide you in the tran­si­tion phase.

2.    Do not fall into the habit of thin­king you will need to be on an elemental diet forever.

When I first picked up several large packages of my elemental diet at the phar­macy, I vividly reminded myself at the begin­ning of each meal that this may be the only form of food I eat for a long time. A voice in my head said, “It’s getting worse because other­wise, I wouldn’t be on it…”

These are under­stand­able thoughts, but they do not help. No one knows what tomorrow holds — imagi­ning the rest of your life on an elemental diet is not a good idea!

Suppose you are on an elemental diet for a stubborn small intes­tinal bacte­rial over­growth (SIBO). In that case, you may not be well in the short term, but in two to three weeks at the latest, you can tran­si­tion to a much more normal diet. After the elemental diet, which has a good chance of trea­ting your SIBO, you will probably feel better than before!

Write down your goal on an index card and pin it to the fridge: check off every day you have managed to stick to your diet — this helps to get through worse phases.

For pati­ents for whom this diet is a more perma­nent solu­tion, at least for now, thera­pists usually cannot put a time frame on the elemental diet course, and that hurts. However, try to imagine what posi­tive effects the elemental diet can have on your health. Maybe you will go into remis­sion or gain weight again?

Before I found a reason­ably tole­rable elemental diet, periods of severe immune acti­vity or colitis were marked by massive weight loss. I felt terrible and lost weight quickly. The liquid, low-residue diet was and is a great way to get nutri­ents that the body needs.

Maybe mix two flavors and see what that tastes like? Other than that, I have used flavors that you would typi­cally stir into cakes or pastries- these also have no fiber, and some, like vanilla flavor, are rela­tively easy to tole­rate. So, a drop of vanilla or lemon flavo­ring in the shake has made my day on several occasions!

However, I would keep my hands off mixes such as cocoa or carob, etc. They ensure that the elemental diet can no longer be absorbed enti­rely in the upper sections of the intes­tine due to the addi­tional fiber.  Adding in those foods possibly nulli­fies the desired effect.

Elemental diets often contain little salt. This is some­times proble­matic for a group of pati­ents with rela­tively low blood pres­sure or dise­ases of the auto­nomic nervous system, which controls blood pres­sure and pulse. For those with such symptoms or illnesses, swit­ching to a lower salt elemental diet can exacer­bate symptoms.

There­fore, it is impe­ra­tive to continue to provide the body with an adequate salt intake. You may be able to use a pure vege­table broth with no inserts, like those used for fasting, as a “salt carrier” or you may resort to tablets of table salt. The former helps to feel warmer and contains more salt and can help people who often feel cold.

Again, please discuss any changes to your regimen with your health care provider.

The leaf­lets of most elemental diets say that such diets or drinks taste best cold, and I can only agree with that. It helped me when I threw ice cubes into the shakes — you can chew on them and suck them. That brings other consis­ten­cies into play once again because always “eating” the same texture is very mono­to­nous in the long run.

When I was free­zing in the winter, and I did not want to drink the elemental diet cold, I warmed the shakes slightly or drank warm water. This can help against feeling cold, which can occur after consuming a cold drink in sensi­tive people.

But perhaps such a cool drink also has posi­tive sides: Expo­sure to cold is a way of stimu­la­ting the para­sym­pa­thetic nervous system and thus exer­ting a rela­xing effect on the auto­nomic nervous system, which can be expressed, for example, in incre­ased heart rate variability.

In a study cooling down the stomach through a 6‑degree Celsius cold liquid compared to a 37-degree Celsius body-warm liquid trig­gered a shift of the nervous system towards incre­ased para­sym­pa­thetic acti­vity, at least in healthy indi­vi­duals. The cold fluid caused a slowing of the heart­beat and incre­ased heart rate varia­bi­lity.[3]

Some­times it can help to dilute the elemental diet. On the one hand, this helps against a “too arti­fi­cial” taste and thus, for some, the asso­ciated nausea. On the other hand, dilu­ting can be helpful, espe­cially in the trial phase for allergy and mast cell pati­ents who react very quickly.

The advan­tage is that the poten­ti­ally into­le­rable subs­tances are present in lower concen­tra­tions in the diluted solu­tion, and thus possible reac­tions are less severe. In the case of into­le­rance, it is also easier to stay below the reac­tion threshold.

However, you should make sure that you consume enough calo­ries and nutri­ents and discuss it with trained professionals.

See point 8: Suffi­cient calorie intake. I fully sympa­thize with you if you are on elemental diet and do not like to eat this special form of diet. But it doesn’t help anyone if you lose weight and become even weaker, does it? There­fore, eat enough Elemental Diet and weigh yourself regu­larly. If you lose weight unin­ten­tio­nally, please discuss it with medical professionals!

10. Watch your blood sugar to prevent side effects.

These compounds provide energy quickly and there­fore also lead to a more substan­tial rise in blood sugar. There is a reason why the intake of carbo­hy­drates in a complex form with fiber is usually recom­mended so that blood sugar rises more slowly. Complex compounds must first be broken down and are there­fore not immedia­tely absorbed in their entirety.

The intake of many simple sugars and carbo­hy­drates in the form of the elemental diet can lead to a blood sugar roller coaster, espe­cially at the begin­ning. Due to this, one can feel fatigued. Unfor­tu­n­a­tely, this is one of the side effects of this type of diet.

What can help against this, in my expe­ri­ence, are fixed meal­times, slow drin­king, and light exer­cise (walks, etc., whatever the condi­tion allows).

Other­wise, you get into the awkward state of being ravenous because you have been post­po­ning that “yummy” meal further and further and then drink the shake too fast.

The end of the story is that you feel sick after­ward or find yourself in the ulti­mate carbo­hy­drate coma. What you also want to avoid is reali­zing in the evening that you have not yet reached your minimum number of calo­ries, and then you have to drink two shakes at once, which also may lead to higher blood sugar.

After someone who was also affected pointed out to me that I had forgotten one of the rather obvious points, I would like to add this good tip here: “If one [elemental diet] does not work or does not taste good, try out several diffe­rent ones. There­fore, don’t throw in the towel right away if you may not have had a good expe­ri­ence with your first elemental diet.” I can only agree with that — thanks for the tip!

These are my personal tips from years of expe­ri­ence with various elemental diets. What else has helped you?  Feel free to write it in the comments and share it with other sufferers. 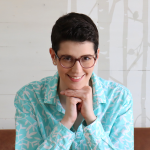 Natur­o­path, hypno­the­ra­pist, owner of an immune system gone crazy with various auto­im­mune special effects. She likes reading through medical papers and is an avid learner of all things regar­ding the human immune system. When her joints and body allow it: enthu­si­astic do-it-your­selfer around the house.